So we know what to expect each week in the EPL in terms of the number of goals and we also know that 80 – 90% of all goals are scored inside the penalty area each season, so it makes the outcome of football fairly predictable.

I have been interested for some time in where possession is regained and how goals are scored according to accepted criteria plus categories of goals that I established. Figure 1 shows the scoring patterns in the EPL for the opening two weeks of this season and 2016-17.

More goals are scored from five passes or less compared with longer passing sequences and have been since Charles Hughes researched scoring patterns in the 1980’s and 90’s and Charles Reep before him. More recent evidence from staff at Leverkusen in the Bundesliga highlighted the fact that most goals are scored in transition with time in possession of less than 11 seconds.

“Soccer is a game of transition,” says Bayer Leverkusen’s assistant coach Lars Kornetka. “There is a relationship between the time a team has the ball and goal rate – the longer they have it, the less chance they have of scoring.”

The ratio of goals in Open Play to Set Plays is 2:1, which is expected based on past evidence. The number of goals in the category of passing behind the defence or to a player level with the last defender is quite different this season with 23 goals compared to 10 last season and as a result the number of goals from Other Methods is lower than last season. The total of goals from Crossing is always the lowest category according to my criteria (area on the pitch) so this is expected.

Another aspect of scoring that Keith Lyons regularly monitors is the time when goals are scored and the number of teams that win after scoring the first goal. Keith has kindly allowed access to his data to share. 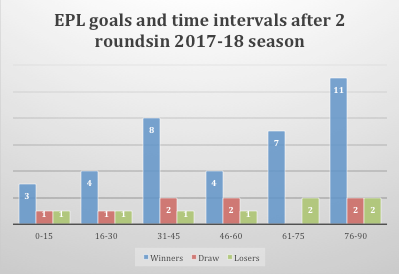 Figure 2 – Goals scored in each half in fifteen minute intervals

Scoring later in the second half has been acknowledge before and there are many reasons attributed to this, such as taking risks to salvage a one point or three points and the onset of fatigue that might effect concentration or the ability to recover, but that shouldn’t be the case towards the end of the first half. The graph of goals in the first and second half shows a very similar pattern over time.

Last but certainly not least is the relationship between scoring the first goal and winning the game. Table 1 shows the data for the opening two rounds.

Table 1 – Outcomes of scoring the first goal in the EPL

The teams that scored first won 85% of the games with a fairly even split between playing at home or away and not one team lost.

This snapshot of scoring in the EPL shows a number of consistent outcomes and has messages for coaches in respect to the speed of transition, where to place an emphasis on regaining possession of the ball, the importance of scoring first and the tendency of risk taking in the final fifteen minutes of the match.

1 thought on “A snapshot of EPL scoring patterns”