Football is played according to the Principles of Play. Differences in playing style demonstrate different ways of applying the Principles, for example some teams prefer to apply the defending Principle of ‘Delay’ by pressing high up the field while other teams prefer to defend closer to their own goal and retreat quickly once possession is lost. While teams may have different philosophies about how they like to play the game, do philosophies make much difference when scoring patterns are concerned? I don’t know the answer to that question but the data in Figure 1 show a number of similarities in the variables, which are linked to possession, e.g. where possession was regained, the number of passes made in the sequences leading to goals and the location on the field where the goals were scored. 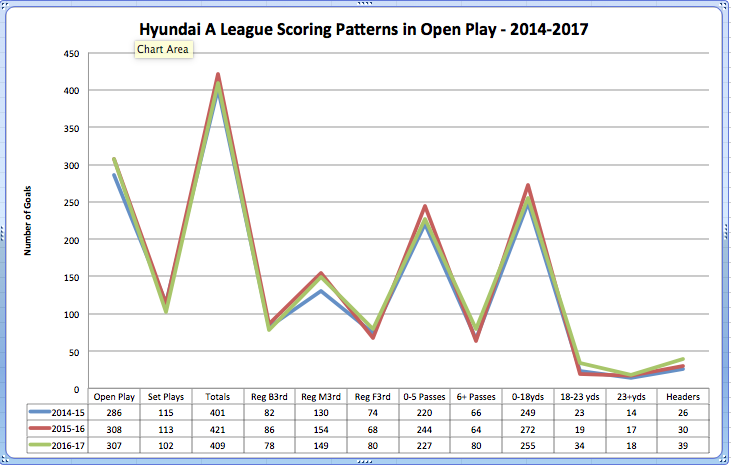 The data shows actual figures for each variable. The number of goals scored inside the penalty area indicates a high degree of predictability, as do the number of goals from regained possession in each third of the field. The similarities suggest that playing philosophy doesn’t seem to influence scoring patterns for all teams over the course of the season, or could it be that most teams have the same philosophy? I will make some comparisons between teams at the top of the league later in this article.

Possession and demands of the game
Another similarity is the number of goals scored from sequences of five passes or less and from six or more passes. The numbers for goals from five passes or less in Figure 1 represent 77%, 79% and 74% respectively for each season. The three teams that won the Minor Premiership each season, Melbourne Victory, Adelaide United and Sydney FC all played a possession-based style of football so why did they score the majority of their goals with very few passes? There are three reasons; the first is a result of seizing the opportunity to attack, the second is a result of regaining possession higher up the field and the third is game tempo, which is influenced by the defending strategy of the opposition. Teams can only attack quickly when they regain the ball and some of the opposing team are not in a position to defend. When all players of the opposing team are able to defend the speed of the attacking team is usually slower, because there is less space to run and pass into and it is more difficult to play through ten outfield players than say five or six. One might expect more goals to be scored from six or more passes from regained possessions in the Back Third because the ball has to travel further, it takes more time and the opponents have more time to get in defensive positions. Data in Figure 2 shows the number of goals scored from regained possession in each third of the field and the number of passes. 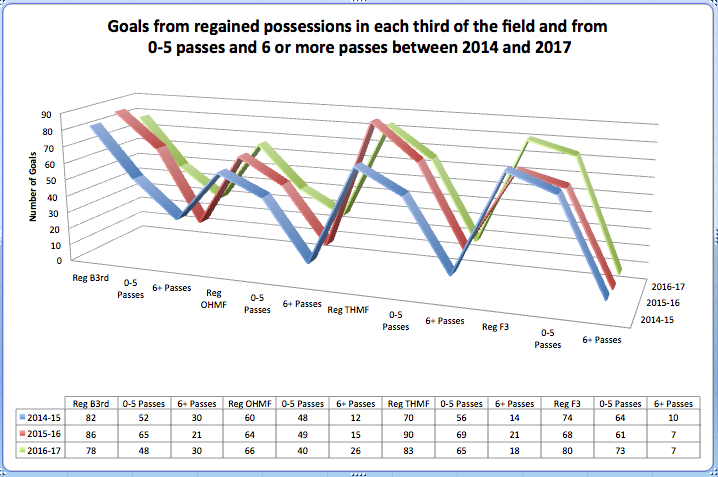 Figure 2 Goals from regained possession in each third of the field.

The goals scored from 0-5 passes from regained possessions in the Back Third (52,65 and 48) represents 63%, 76% and 62%. The closer the team wins the ball to the opponent’s goal the trend is for the percentage to increase for goals scored with fewer passes. The trend is for the percentage of goals from 0-5 passes to increase as possession is regained closer to the opponent’s goal.. 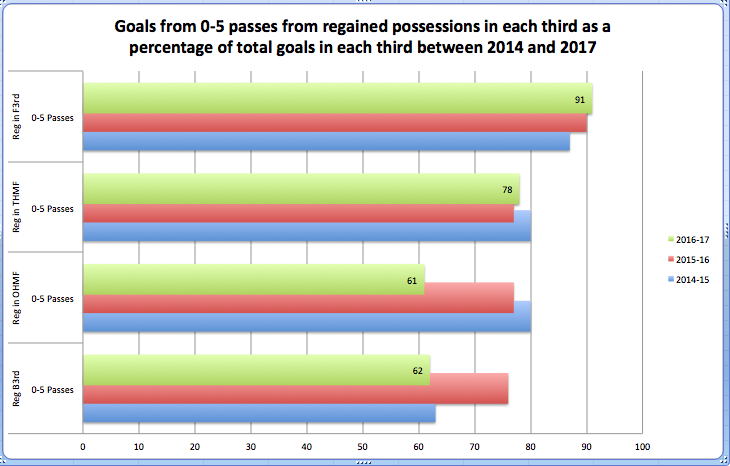 Figure 3 Goals from 0-5 passes from regained possession in each third of the field expressed as percentages.

Figure 3 shows the data for three seasons expressed as percentages. Notice the trend for the percentage of goals from 0-5 passes to increase as possession is regained closer to the opponent’s goal. The percentage of goals from regains in the Back Third in 2014-15 (Blue bar 63%) is almost two thirds higher than the number of goals from 6 or more passes (37%), similarly in 2016-17 (Green bar) and three times the number in 2015-16 (Red bar 75%). This trend is not apparent when individual teams are analysed as shown in Figure 4. 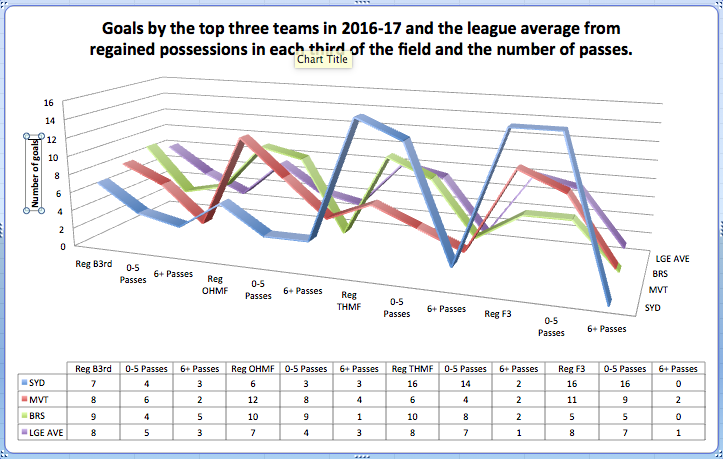 Figure 4 Goals by top three and league average from regains in the Back Third.

The figures at the bottom of the chart along with the graphic display show there is little consistency between the top three teams in terms of where they regained the ball before scoring in Open Play apart from the obvious and expected fact that they all recorded the highest percentage of goals from 0-5 passes in the Final Third of the field. Figure 5 shows the results expressed as percentages, which make comparisons slightly easier to make. 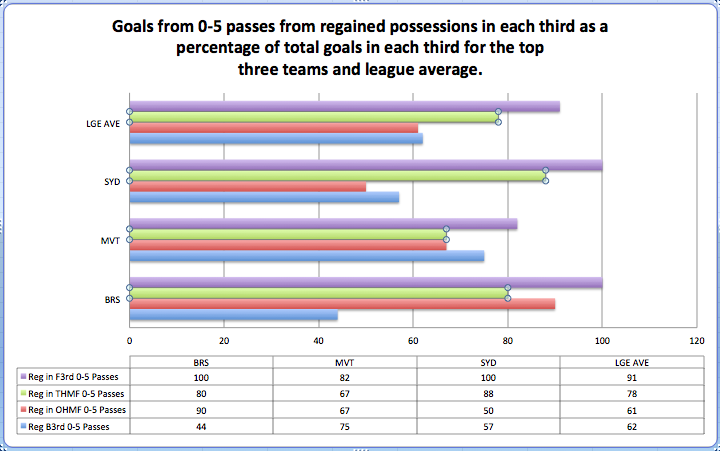 Figure 5 Goals by the top three teams from 0-5 passes expressed as percentages of total goals from each third, from regained possessions in each third of the field.

Regained possessions in the Back Third and the role of the goalkeeper
Of all the goals scored from regained possessions in the Back Third in Open Play the goalkeeper was involved between 25% and 35% of the time through passing throwing or taking free kicks and goal kicks. In 2015-16 five goals started from a short goal kick (6% of B3rd total) and two goals were scored in 2016-17 (3% of B3rd total). 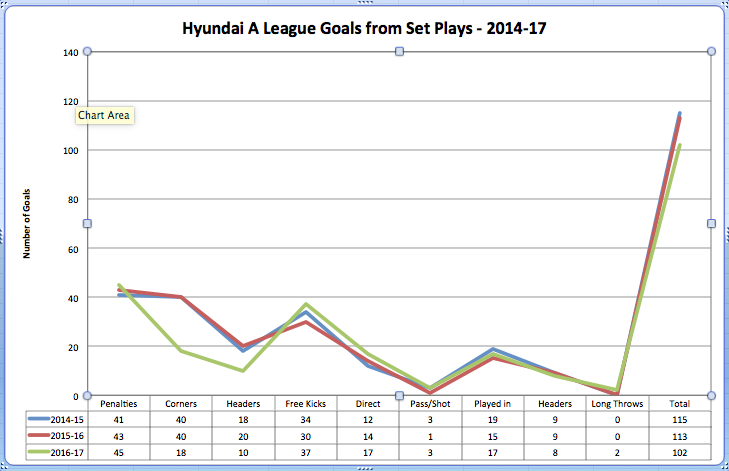 Conclusions and implications for coaches
After producing the evidence of scoring patterns from the previous three seasons of the Hyundai ‘A’ League I have formed the following opinions.

Transition from defence to attack
Speed of transition is a vital component of scoring goals regardless of where possession is regained. The high number of goals scored from less than five passes supports this view. From a coaching perspective I would emphasise the importance of passing or running forwards with the ball, whenever possible, in preference to passing the ball backwards to a supporting team mate. This would be especially applicable when regaining possession in the teams own half of the field when the temptation to play slowly and pass backwards would be high. This would be a missed opportunity to attack quickly especially when the opponents are not in a good position to defend.

Playing style or philosophy
The importance of playing style or football philosophy is exaggerated. Most coaches want to be in control of the game as much as possible so being able to keep possession is important, that is accepted. The philosophical decisions are based around two aspects of play. Will you try to play through the opposition when they can all defend or pass over the top of them? The second philosophical issue is where on the field will you decide to defend as often as possible? Will it be high in the opponents half of the field or will you drop to defend near the halfway line or deeper inside your own half of the field?  An example is Sydney FC who scored 32 of their 45 goals from regaining the ball in the oppositions half of the field, which is an amazing 71%; the league average was 53%. Melbourne Victory scored 46% and Brisbane Roar scored 44% from regained possessions in the opponents half of the field. Either Melbourne or Brisbane had a strategy of defending deeper or were not as efficient as Sydney at pressing opponents in their half of the field.

Demands of the game
The game situation determines if you play quickly or slowly depending on where and how the opposition defend and whether they have all players able to defend. If teams press quickly the game speed increases, if they drop off the game speed slows down, just as it does when the opposition get all players behind the ball anywhere on the field. If you are in doubt just watch a few games and you will see it happen.

Coaching practices
Recognising when you can attack quickly and when you have to play slower is really important so I would build direction in to all possession type practices, 5v2 etc. so the players have to continually move themselves and the ball in a forward direction. I would play more games and frequently practice playing through opponents by creating a densely populated midfield zone within a small-sided game set up. ‘The Box’ practice in my App or on my website explains how to do this.

Involvement of the goalkeeper
I would encourage my goalkeeper to distribute the ball quickly to eliminate as many of the opposition as possible and encourage outfield players to play forwards rather than backwards when possession is regained in the Back Third or own half of midfield. I would refrain from playing short goal kicks unless the opposition drop off towards the halfway line, the risks of playing out from a goal kick under pressure are not worth the rewards.

Defending
The importance of being good at defending cannot be underestimated. Sydney FC only conceded 9 in Open Play whereas Melbourne Victory and Brisbane conceded 26 and 29 respectively. It makes sense to practice defending as a team but the evidence of scoring patterns makes it imperative to practice defending in transition; being prepared to defend before you lose the ball is a critical component of not conceding at all. Another consideration with regard to defending strategy would be to press high when all the team have been able to make it into the opponents half and for players on the ‘wrong side’ of the ball when possession is lost, to make immediate recovery runs to ‘ambush’ or overload the player in possession.

Attacking play and keeping possession
Finally I would encourage players to think about attacking quickly as a priority and when that is not possible to focus on getting the ball and as many team mates as possible into the opposition’s half of the field. I would discourage full backs from losing contact with central defenders unless a midfield player replaces the full back in a positional sense. I would encourage all players to adopt positions where they can see opponents and the ball and discourage the player in possession from passing to a team mate in our half of the field who has his/her back to goal. This is a situation that is fraught with disaster. The evidence shows that in the past three seasons goals from regained possessions in the opponents half of midfield was higher than goals from regained possessions in the teams own half of midfield and from regained possessions in the Final Third.