Recent conjecture about the plight of the Socceroos on the road to Russia has covered the tactical efficacy of the team, the risks associated with the playing style and philosophy that has been developed over the past four years as well as the perceived impact of making changes to the structure of the team, i.e., changing from a back four to a back three.

I have an opinion but I like to look for evidence to see if facts support or refute my beliefs. Evidence also has to be viewed in the context of the game in order to make sense and provide perspective. The chart below (Figure 1) show the scoring patterns of the Socceroos in Stage 1 and Stage 2 of the World Cup qualification process. 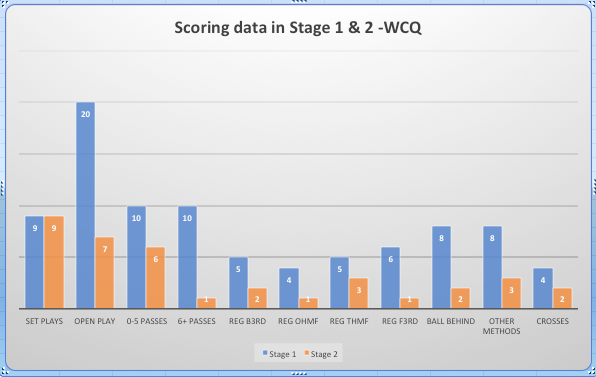 Figure 1. Comparative data for goals in Stage 1 and Stage 2 of qualification

In Stage 2 against tougher opposition we scored 7 goals in Open Play (46%) and 9 from Set Plays (54%), which is unusual but does it really matter as long as the team scores goals?

What the figures show is that we have scored consistently from Set Plays, which is a real positive because in many matches a goal from a Set Play is often the difference between getting something or nothing out of the game. That was the case in our matches in Stage 2 against Thailand away, Japan at home, UAE at home and Thailand at home, despite dominating the game from start to finish. Figure 2 shows the breakdown of goals from Set Plays and that we have the ability to score from all situations.

Playing Style
We have a playing style that involves pressing the opposition as early as possible when we don’t have the ball and playing out from the back whether we are under pressure or not. This aspect of the playing style, playing out under pressure, has been questioned consistently because it involves a high degree of risk to play through the opposition, particularly when they press high and try to force a mistake. Presumably that is the logic behind our decision to press opponents high up the field. Detractors of playing out from the back third when under pressure ask if the risk is worth the reward?

Risk is an accepted factor in football, but it is heightened when scores are level in a match and / or when there is a bigger prize at stake like qualifying for the World Cup.

What does the evidence suggest about the risk versus reward of playing out from the back and particularly playing from within the back third of the field?

In Stage 1 we scored nine goals from regained possessions in our own half of the field; five from the back third and four from our own half of midfield (OHMF). The five goals from regained possession in the back third involved minimal pressure from opponents on four occasions and one occasion against high pressure when we had a throw-in to restart the game against Jordan. The goalkeeper was involved twice and had little difficulty distributing the ball. In one of the five situations the score was 0-0 and in the other four situations we were ahead in the match.

Four of the five goals were scored with six or more passes and these were when the opposition dropped off or applied little pressure to the ball. The only goal from five or less passes was when Jordan tried to press the ball from a throw in in our back third.

It would be logical to expect a higher number of goals in Stage 1 (11 out of 20, 55%) to have been scored from regained possessions in the opponent’s half of the field because we would dominate territorially, press high up the field and make life very difficult for opponents. It would also be logical to expect fewer goals from playing out from the back because weaker opponents would find it more difficult to reach their final third on a frequent basis. 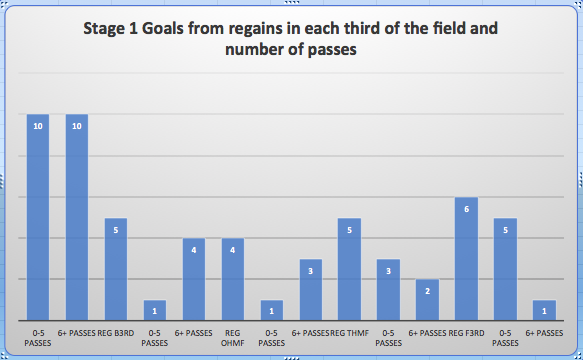 Figure 3. Stage 1 – Goals from regained possessions in each third of the field and number of passes

Stage 2 scoring patterns
In the second stage we scored seven goals in Open Play and nine from Set Plays. Similar to Stage 1, pressing high and quickly appeared to have thwarted attacks by the opposition with five of the seven goals scored from regained possessions outside the back third. See Figure 4. 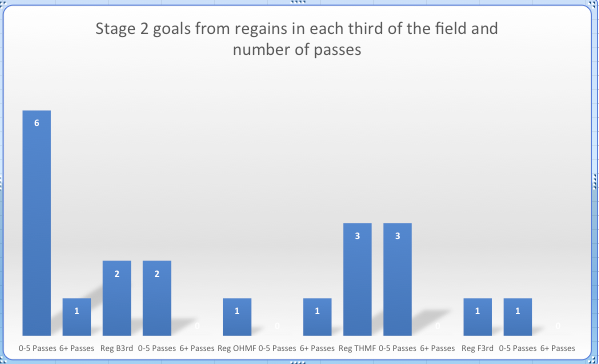 Figure 4. Stage 2 – Goals from regained possessions in each third of the field and number of passes

Two goals were from playing out from the back third, both of which were a result of moves involving five passes against minimal pressure from the opponents, UAE away and Saudi at home.

One might expect to score fewer goals against better opposition in Stage 2, which is what happened. It would be more informative to look at events preceding every attempt at goal, which I haven’t done but I did look at the events preceding goals scored from Set Plays. Three of the Set Plays were preceded by passing moves originating in the back third, all involving more than six passes and against minimal pressure from the opposition; the penalty at home against Japan, the corner against Iraq away and the first corner at home against UAE. Five of the remaining six goals from Set Plays came from regaining the ball in the opposition’s half and one in our own half of midfield, following a goal kick by the opposition. All play preceding these six goals from Set Plays involved less than five passes.

The goals in Open Play in Stage 2 came from playing the ball behind the opposition (2) Other Methods (3) and crosses (2). Compared with the goals in Stage 1, which came from playing the ball behind opponents (8), Other Methods (8) and Crosses (4), the results indicate less success in Stage 2 with central attacks in the opponents half of the field. The reason why we had less success in central attacks in Stage 2 compared with Stage 1 is not the point of this article but success in this area of the field is the biggest challenge to all teams of similar ability.

Stage 2 Summary
The evidence that more goals came from regained possessions outside the back third shows the benefit of pressing higher up the field and as quickly as possible, but keeping in mind that not all regains in the oppositions half of the field are a result of pressing. Some regains come from throw ins and free kicks and plain mistakes like the mis-kick by the Saudi goalkeeper that  went straight to Tommy Juric, who scored.

One of the total seven goals we scored from playing out of the back third was under high pressure from opponents so the reward does not suggest it is worthwhile taking too many risks when playing out. The fact is that few goals are scored from playing out from the back so why does any team do it? The most common answer is to keep control of the ball and be in control of the game, which is valid and my belief as a coach. Another consideration is that to be able to press high and regain the ball you have to get your players over the half way line as a group and keeping possession while making progress is a sensible solution. 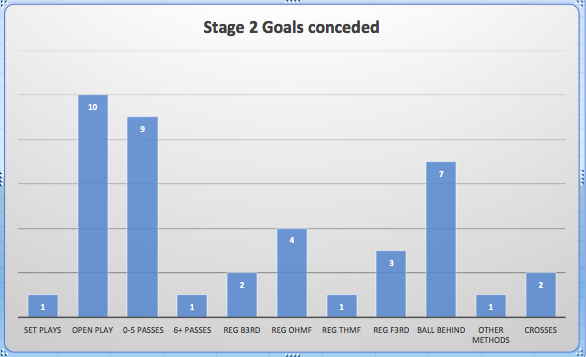 Did we concede goals from playing out under high pressure?

We conceded ten goals in Stage 2 of the qualification process and the data in Figure 5 provides an overview. Nine of the ten goals we conceded in Open Play were from five passes or less suggesting quick transitions by opponents when we lost the ball, which is normal.

The evidence says we did not concede goals due to playing high risk football in the back third.

We conceded three goals when opponents regained possession in our back third, two of these were from throw ins (Japan and Saudi away) and the third was a clearance from a cross in the match versus Thailand away. In all three situations we had most of our team able to defend.

We conceded the second goal against Japan away when we lost the ball in our half of midfield, trying to play through midfield but we had more defenders than they had attackers between the ball and goal when we lost it. That goal was a result of poor passing and slow defending, not high risk play.

We conceded four goals when opponents won the ball in their own half of midfield; against Saudi away we had more defenders than attackers, against Japan and Saudi at home it was the same, but when we conceded at home to Thailand we were outnumbered and players did not recover quickly enough to redress the balance.

We conceded two goals where our opponents regained the ball in their back third. Against Iraq away the goalkeeper kicked long, leading to a flick on and a cross which they scored from and Saudi scored in Melbourne after playing from the back third before playing a long diagonal ball behind our defence; on both occasions we had more defenders than they had attackers.

The evidence shows that we have conceded seven of the ten goals in Open Play from the ball being played in behind our defence, two from Other Methods or shots in front of the defenders, (Japan away and Saudi away) and one from a cross (Iraq away). In case you are thinking we conceded against Japan away from a cross, by my definitions that goal was from a ball played behind the defence from the Wide Left area, which is slightly deeper than the crossing area.

From an attacking perspective we had few problems in Stage 1 but we found it difficult to score in Open Play in Stage 2 (7 goals) but had great success from Set Plays (9 goals).  The low number of goals from playing the ball behind opponents in Stage 2 is a concern and particularly from the central area between the halfway line and the penalty area. My research has shown this the most important area leading to shots at goal and creating opportunities, which depend on three things; players making forward runs combined with players in possession making forward passes and dribbling past opponents to disturb the balance in defence. My view is that playing with a back four or a back three has little or no bearing on this aspect of the game. The challenge is to get players in advanced positions where they can pass the ball forwards more often than they receive the ball with their back to goal and are forced to play backwards or dispossessed when trying to turn. That is easy to say but not so easy to do.

From a defending perspective we have been conceding goals when we have had ample opportunity to defend with numbers but we have been exposed by passes behind the defence more than any other aspect of play, the exact opposite to our attacking deficiencies. We only conceded one goal in Stage 2 from a Set Play, which was excellent.